Team Spotlight: Edmonton Eskimos Cheer Team is "The Pride of the CFL"

Edmonton Eskimos Cheer Team is "The Pride of the CFL"

The Edmonton Eskimos Cheer Team, presented by Bedrock Homes, known as "The Pride of the CFL (Canadian Football League)",  is a powerhouse in acrobat stunting and providing entertainment to fans. This professional cheer team of 41 athletes not only performs at Edmonton Eskimos football games throughout the year, but attends community events and volunteers with charity organizations and youth in the community. Fun fact: The team also made history in 1986 when they became the first professional cheer team to introduce male athletes!

While football is on hiatus here in the United States, the Canadian Football League is in full swing!  Their season runs from May through November, and the cheer team ends their season by attending the celebrations for the Grey Cup, the "Superbowl" championship game of the CFL. Representing the Edmonton Eskimo Football Club and the City of Edmonton, the team spends countless hours perfecting a showcase of their talents to share with fans from across Canada - in a variety of weather conditions too! 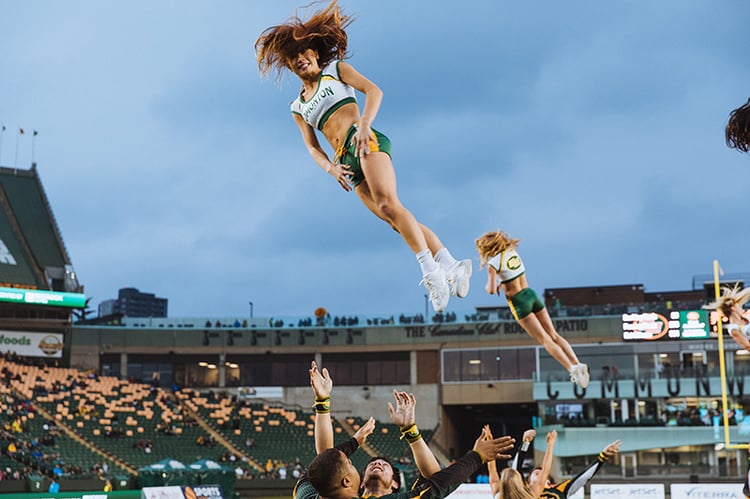 Such a multi-talented team calls for a multi-faceted wardrobe. "The uniforms need to be comfortable for dancing and very importantly, safe for stunting," said Karen Kondoski, the team's manager.  "The focus is on showcasing the cheer team for their athleticism and ensuring they feel confident in their uniforms."

From sparkle jerseys and shorts to sporty cropped jackets and leggings, the team incorporates a wide range in styles. "All the uniform pieces have been designed with the ability to mix and match so the team can be prepared for any weather! " said Karen.

The team was able to make the variety of online styles look cohesive by customizing each piece with their branding - all are in their traditional green and yellow colors and sport the Eskimo's logo. We love the mix and match approach because the outfit possibilities are truly endless!

Check out more of the Edmonton Eskimos Cheer Team's looks and Q&A with Karen, below. 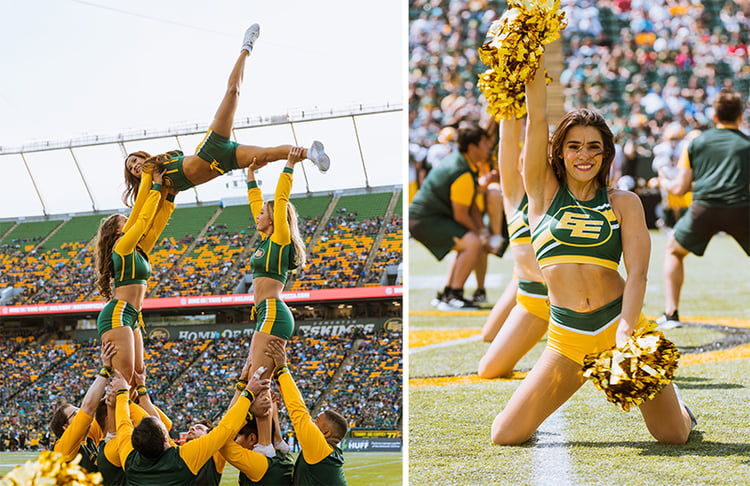 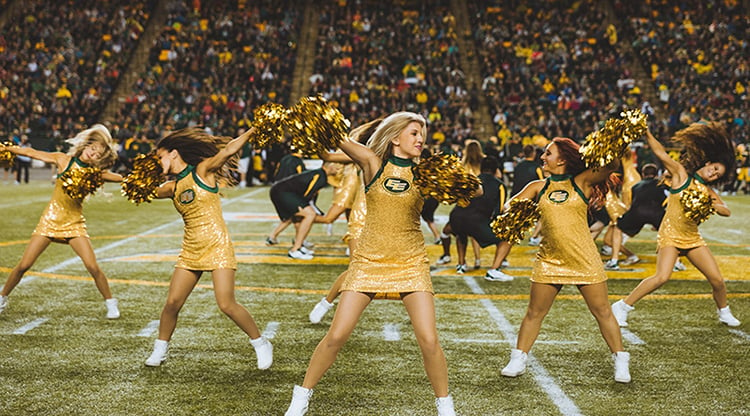 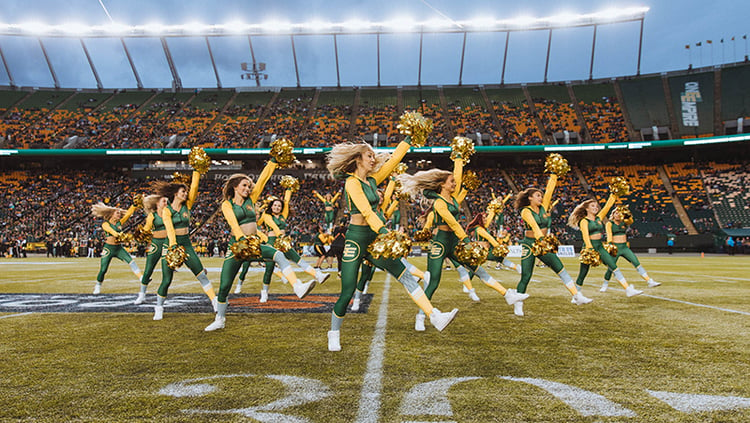 Don't miss the opportunity to be part of the best cheer team in the country! Tryouts start March 1st! Visit www.esks.com for details! @officialedmesks

The Edmonton Eskimos Cheer Team is a professional cheer and dance team in the Canadian Football League, based in Edmonton, Alberta, Canada. The team consists of 41 athletes that dedicate hundreds of hours of training to provide exceptional entertainment for Eskimos fans. Outside of practices and games, they spend countless hours in the community performing at events, volunteering with various charitable organizations and working with youth in the community. Every year they culminate the season with a team trip to the Grey Cup, the championship game for the CFL, where they perform at numerous functions, representing the Edmonton Eskimo Football Club and the City of Edmonton.

The Edmonton Eskimos Cheer Team was the first professional cheer team to introduce male athletes in 1986. By 1996, the male contingent on the cheer team had grown to 16 members strong and remains a dominant force on the team today. These male athletes were instrumental in the introduction of acrobatic stunting to the cheer team in 1990. Now, 30 years later, the Eskimos Cheer Team continues to be a powerhouse in acrobatic stunting, which complements their exceptional dance team and crowd-leading abilities. They are proud to have paved the way for male athletes and stunt teams in professional cheer. Year after year, they live up to their moniker “The Pride of the CFL” and hope to continue to provide first class entertainment for one of North America’s finest sports clubs. These athletes are proud of their success and love what they do.

Edmonton football games are played outdoors from May through to mid-November. Because of the climate, the cheer team needs to be prepared to perform in hot and humid weather, rain, as well as freezing temperatures and snow! The uniforms need to be comfortable for dancing and very importantly, safe for stunting. The focus is on showcasing the cheer team for their athleticism and ensuring they feel confident in their uniforms. All the uniform pieces have been designed with the ability to mix and match so the team can be prepared for any weather! Of course, since the Edmonton Eskimos team colors are green and gold, The Line Up has ensured that each design falls in that color scheme.

The Edmonton Eskimos Cheer Team performs several routines during a football game. Each of these routines includes both dancing and acrobatic stunting. The team uses a variety of music genres from classic rock to hip-hop, so there is something that appeals to all the fans and even the players on the field.

What are you most excited for this upcoming season?

At the end of every season, you can ask any rookie what their favorite moment of the season was, and it is always the first time they walk out onto the field for a game. The Edmonton Eskimos play at The Brick Field at Commonwealth Stadium, which is the largest open-air stadium in Canada. After months of practices and hard-work, those first steps on the field and the first routine is a combination of nerves, pride, adrenaline, and excitement! The feeling cannot fully be described, but it is shared by everyone.

Another favorite memory is the season end trip to the Grey Cup celebrations. The cheer team spends the second half of the season focusing on routines specifically for the Grey Cup and takes pride in putting together an innovative showcase of their talent for CFL fans from across Canada. They work hard to bring a routine that is high energy and will leave a lasting impression on fans.

Edmonton Eskimos Cheer Team, the former cheer team coach retired at the end of 2018. Going into 2019 there were questions about what the Eskimos Cheer Team would look like now. The new coaches saw this as an opportunity to rally the team and set goals to come into the 2019 season better than ever. They exude the same level of athleticism and professionalism and continue to entertain the same exciting way that Eskimos fans had come to know and expect.