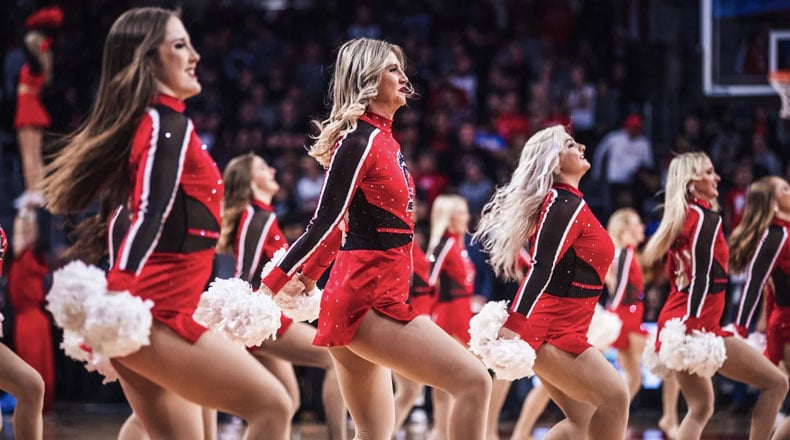 After getting to know the University of Cincinnati Dance Team, it's clear this group has a strong work ethic and team bond. As a team of "do-ers" that push to be the best, and a motto of "Team Not Me"... it's safe to say we understand why their strong sense of team led to a pom routine filled with school pride!

"We really wanted it to show off how much we love our school," said the team's coaches, of their UDA Nationals performance.  "Our music started and ended with our fight song and had many moments throughout stating 'UC' and 'Bearcats'. We also started and ended with doing the motions for 'UC'. This is something our fans do every single game, multiple times a game!"

A routine full of school spirit called for a custom pom uniform to match! The design was based on a sketch from the dance team's coaches, and the first prototype started with an all red dress with black detailing. The team then did some tweaking for a final prototype before going into production to get the look just right.

The end result was a bright red uniform that popped on the UDA Nationals stage with contrasting black mesh insets, white trim detailing and a rhinestoned C-Paw logo to top it all off! We loved the look they came up with so much we decided to add it to our online store as the Cincy Dress.

Check out their high-energy pom routine and learn more about the University of Cincinnati Dance Team in their Q&A below! 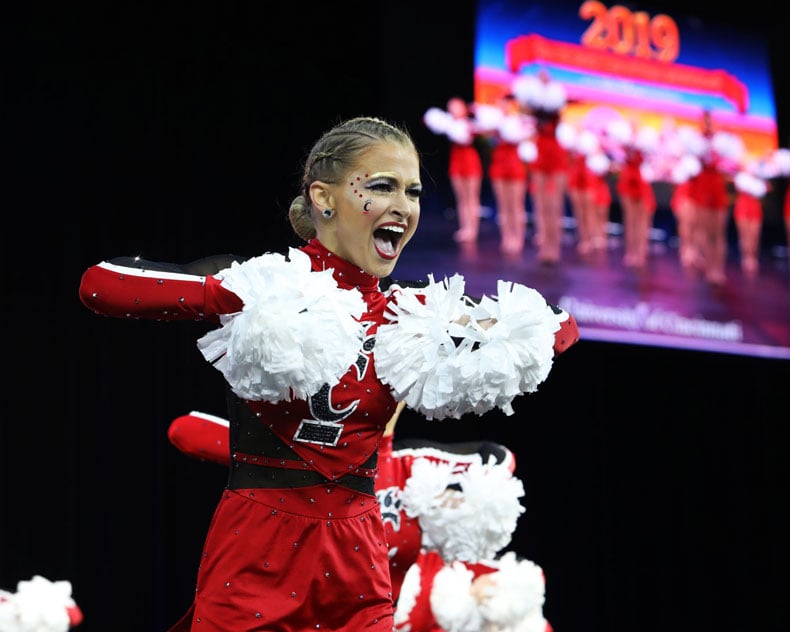 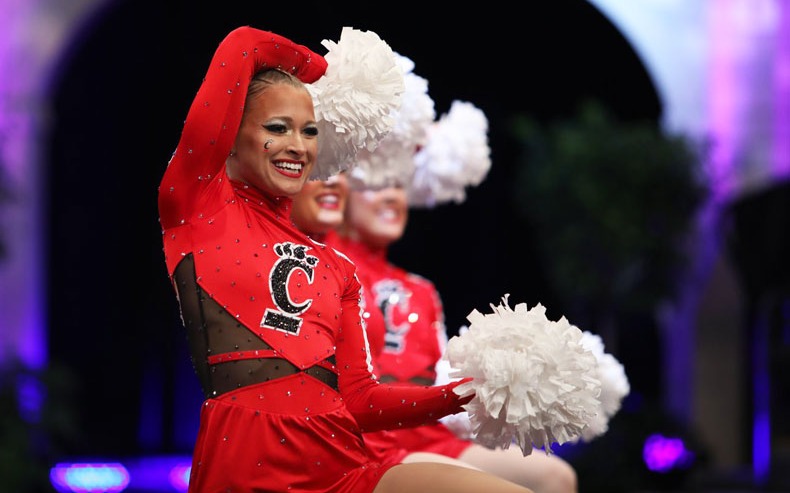 Q&A with University of Cincinnati

Pride for our school was definitely a theme this year for our pom costume, choreography and music. Our music started and ended with our fight song and had many moments throughout stating “UC” and “Bearcats”. We also started and ended with doing the motions for "UC". This is something our fans do every single game multiple times a game! Traditionally, we always have a C-Paw on the front but this year added “Bearcats” to the back for the first time ever. We really wanted it to show off how much we love our school. We also wanted it to match the vibe of our music, which was fun and upbeat. We loved the bright red and how it really popped on stage with the black mesh cutouts and white detailing. We think it perfectly fit our music and represented the personalities of the girls on our team!

We have so much confidence in ourselves and each other. We are a team of do-ers. When we get corrections we immediately say, “I will be better.” When our coaches tell us to try a crazy trick we say, “I will do it.” This creates a sense of accountability and trust. We are also unique because of our bond. It is so hard to get a large group of girls to actually love each other, but we really do. We would do anything for each other and know our teammates would do the same for us.

What does teamwork mean to you?

There is a saying that has been passed down from team to team for many years. That saying is, “Team not me.” This means that no matter how hard the practice is, every girl on the team is giving 100%, 100% of the time. We do it for the girl next to us. “Team not me” is putting your teammates above yourself and realizing what needs to be done for the greater good of the team. When every girl on the team understands that mentality, then that is teamwork.

How do you rally your team?

We talk a lot when we do full outs and one word we say to each other while we’re dancing is "arena." "Arena" reminds us to focus on each other. It reminds us of all the hard work we've put in our gym and the end goal of the season. Sometimes you could hear us say it 20+ times in one full out.

What is your favorite memory from this season?

A favorite team memory comes from this past nationals' season. We were finishing out a long day of practice with conditioning. Conditioning at the end of a national's practice can be just as much of a mental workout as it is a physical one. This particular practice, we were in the midst of a challenging workout and running full-outs. The team was yelling and cheering for each other, and pushing themselves to the max. No one complained or expressed any sign of letting up. It was the perfect “team not me” moment, and a personal favorite of many of the team members.

We had a very young team this year. We only had 9 upperclassmen on our team and the remaining 11 girls were underclassmen. With so many younger girls, it can be challenging. Not many of them had danced on the national's floor before. However, this season, it was amazing to see the younger girls step up to the plate. In our routines, no one could tell who was a senior versus who was a freshman. It was a very cool feeling to trust every single girl on the team no matter what year on the team they were.