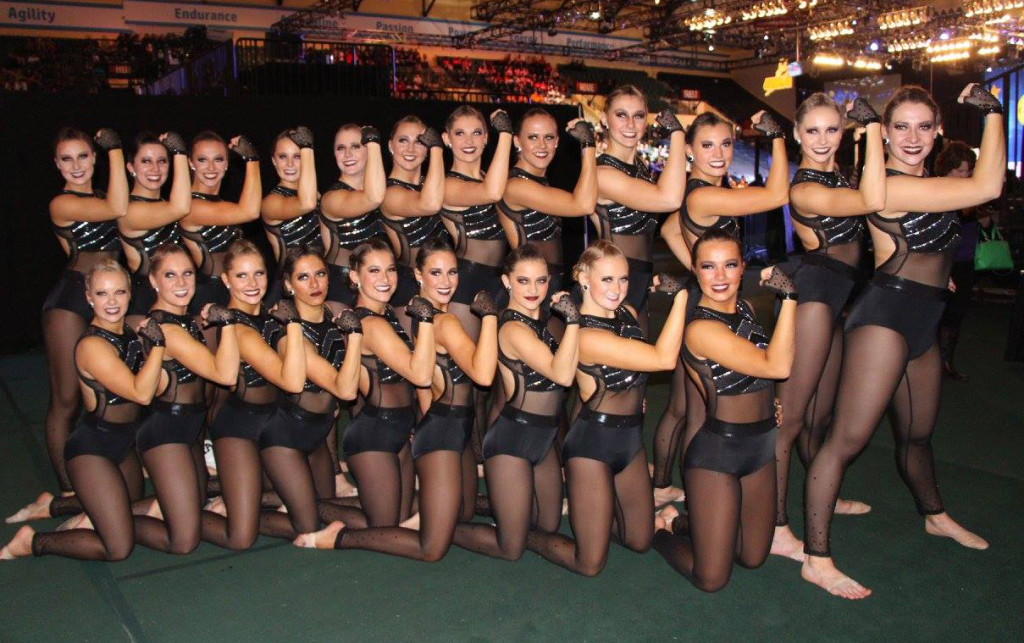 We've worked with the University of St. Thomas Dance Team (USTDT) for a while now, and it's always exciting to see what inspiration they bring us each summer! From elegant to edgy, the team always seems to fully bring their chosen theme to life. This year was no exception!

USTDT found inspiration for their jazz routine from one very strong woman: Ronda Rousey. Rousey - an American mixed martial artist, UFC Champion, and Judo Olympian - was ranked the most "dominant" active athlete in 2015, man or woman. The team connected with her story of strength and pride, rise against the odds, and female empowerment. Their goal for their 2015-2016 season? Push the limits, just like Rousey, and have a routine & costume they hadn't seen before. 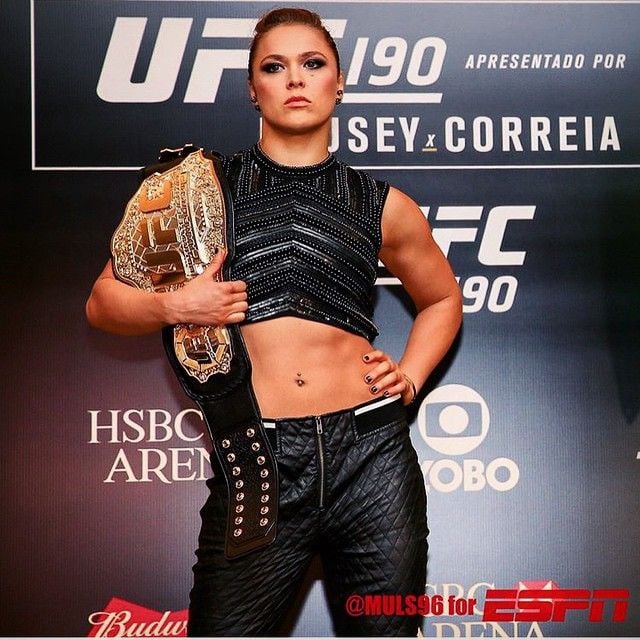 The first place the team sought to incorporate their inspiration was in the music. The song that was composed for their routine combined an instrumental version of Beyonce’s “Flawless” overlaid with strong sound bites from Rousey. Some of the stand out quotes the team rallied behind were:

Choreographers Anna Miller and Carsen Rowe gave the team innovative choreography that required attack and strength behind their movements. The girls absolutely loved performing the routine by getting into the character and story that their choreographers gave them. 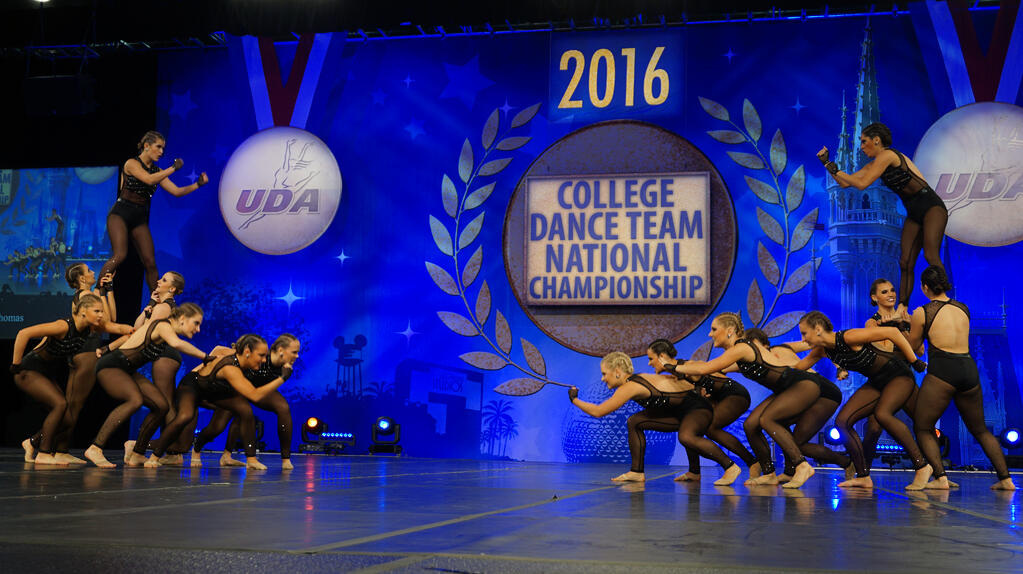 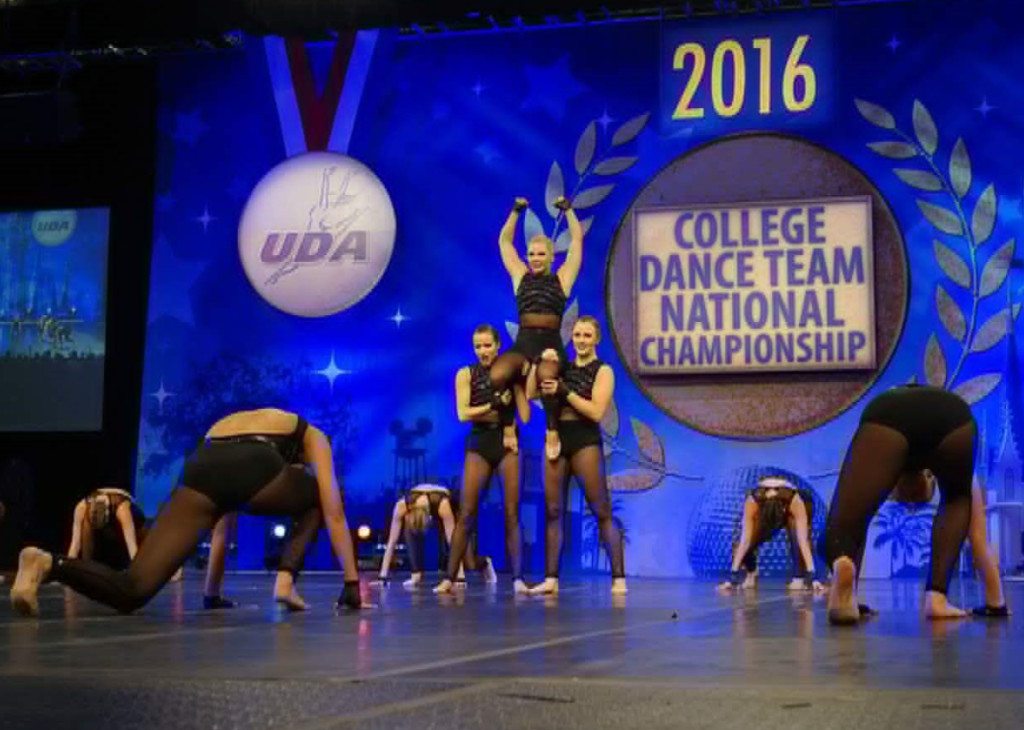 Coaches Alysia, Pam, and Julia, came to us full of design ideas for their jazz costume. Their main source of inspiration came from the black on black beaded crop top Rousey wore to promote a UFC fight (above.) A few items the team loved about the top that they wanted to be sure to incorporate:

Plus a few other must haves: 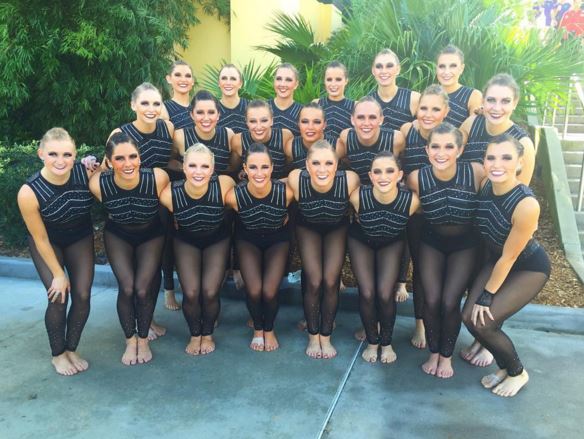 Filling in the Details

As we began to collaborate on design, the team was faced with one dilemma: they wanted covered legs, but an alternative to pants. Shorts were rejected because they cut off the girls' leg line in an unflattering spot. Solution: a high waisted brief with mesh leggings. The team was initially hesitant to try the brief, but in the end they loved it! Because it hit at the perfect spot on the leg and the sleek black fabric was slimming, it was was extremely flattering on all the girls!

The team also loved the variety of textures on Ronda's top, but understood that beads would be too expensive and wouldn't stretch with the costume, limiting their freedom of movement. So we dove deep into our design bucket of ideas to give them the look they wanted while still honoring their budget.

The Line Up designer Michelle, found elastic rhinestone trim that gave a beaded look from a distance and made the costume pop on stage. To save cost, the girls sewed the trim on each individual costume themselves. Each costume took 3 hours for the trim alone!

For even more texture, a variety of fabrics were incorporated into the geometric blocking on the bodice. Black myst for a leather look, black sequin zsa zsa for extra sparkle, and sleek black matte added layers of dimension. Plus all had great stretch properties to allow for full movement while dancing.

For the finishing touch, USTDT added mesh gloves (and completely stoned them, of course!) to complete the overall "fighter" look. 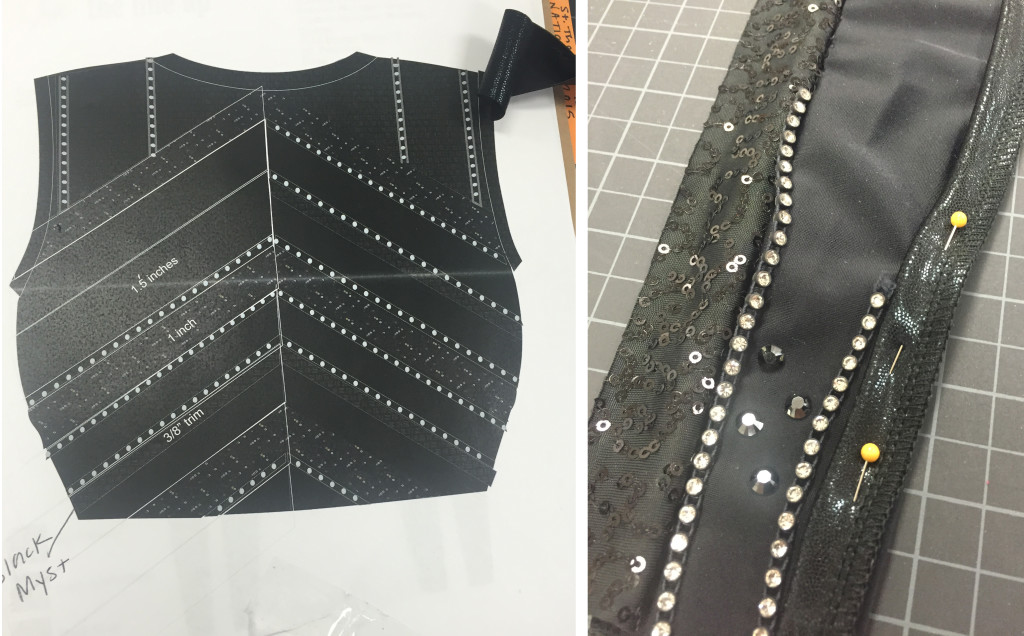 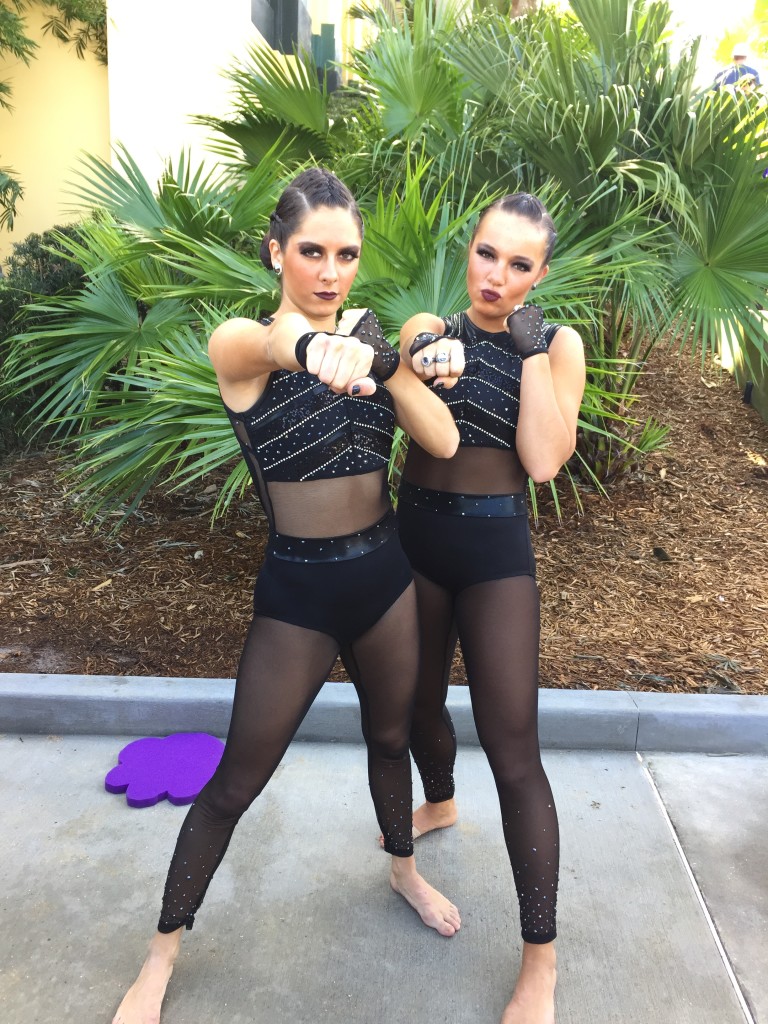 And voila! The Ronda Rousey inspired jazz costume was created. The low open back was also one of the team's favorite parts of this costume- so chic! The all-black costume really showed off the dancers in two spots that emphasized their strength - their bare arms and back!

"The moment the girls put on the costume, they were transformed into character, ready to conquer the world," coach Pam mentioned.

The team wore the final look while competing at UDA nationals this past month, and finished runner-up in the Open Jazz Division! Congratulations, ladies! 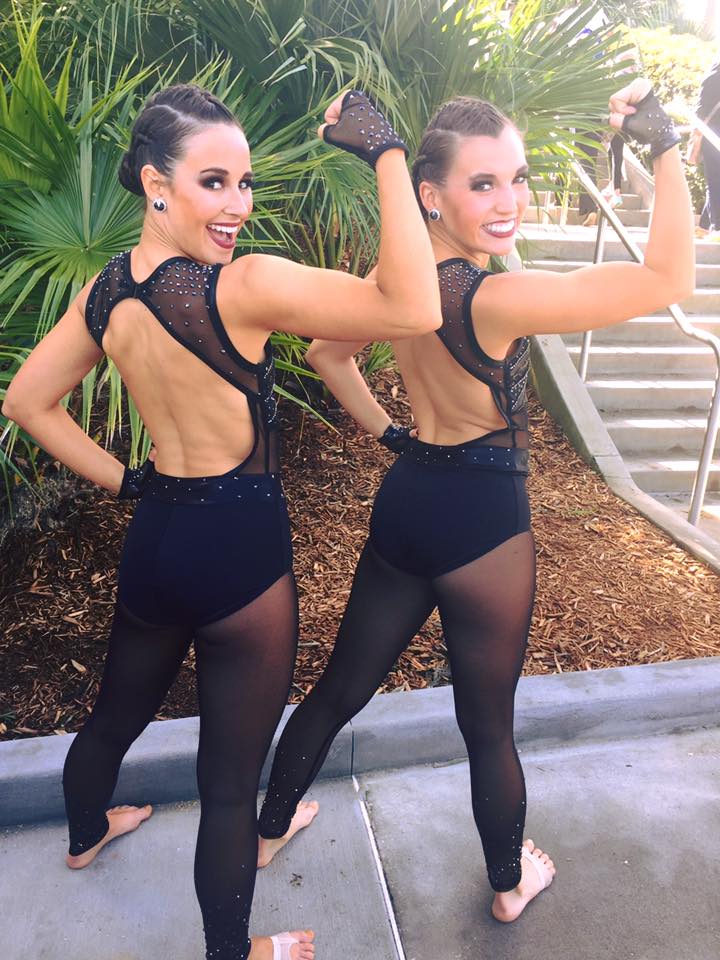 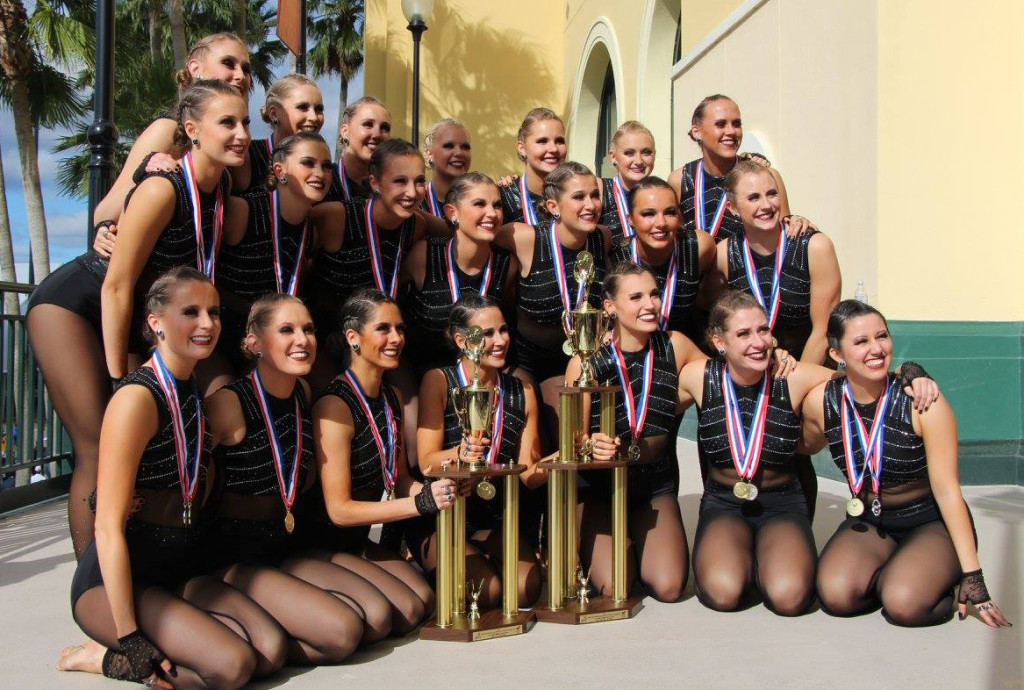