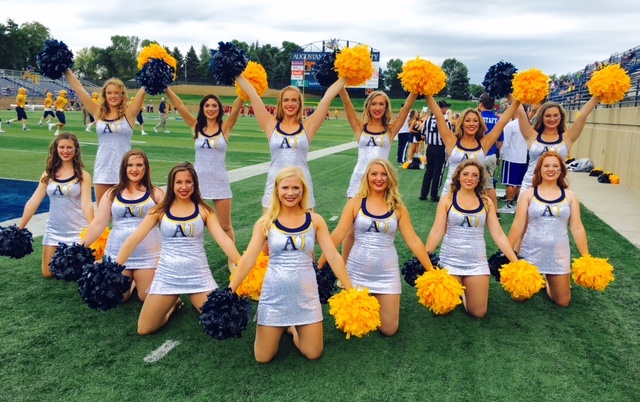 Football season is officially in full swing, and we're loving seeing all the gameday spirit on the sidelines!  This week we're taking a look at Augustana Dance Team, from Sioux Falls, South Dakota, who recently acquired a crisp new gameday dress to feature their school's new logo.   The Vikettes join forces with the cheer squad to form the Augustana Spirit Squad, and perform at both football AND basketball games throughout the school year. Read on to see how the Spirit Squad stands out on game day!

So what's unique about the Augustana team?  The Augustana Spirit Squad is a multi-faceted collegiate group made up of both a Cheer Team and a Dance Team.  “We are 40 athletes strong and both teams know the same fight song, cheers, and 4 sidelines dance. This is very fun and gives us a unified team look. Both teams have their own talents that they showcase at games but we also work well together to create a great game day environment for our fans!”

In addition, the Dance Team showcases both Hip Hop and Pom/Jazz routines for pre-game and half-time performances, eventually learning 12-15 routines thought the school year. This Squad really does it all for its school and fans!

A New Look for a New Logo

The Dance Team showcased their school’s brand new logo with new custom cheer uniforms this year! “We wanted something very collegiate looking that would pop on the football field and basketball court,” Jenna stated.  The team chose a sparkly white zsa zsa fabric for the dress, which contrasts nicely against the field and court letting the team standout!  The choice also show's off their new logo, embroidered on the chest. “We were so excited for our new dance dresses from The Line Up!”

One of their favorite events of the year?  Each Spring and Fall, the Spirit Squad hosts a Kids Clinic to share their talents with local kids! “They are the best fans and cheer with and for us the whole game!” Jenna said, “We love having the kids perform with us and show off their new skills!”

Currently, the Spirit Squad is gearing up for a busy season this Fall and Winter. Coming up in October, Augustana University will be hosting a big rivalry football game. “Both of the Universities playing are in the same town and our stands will be completely packed for the big game,” Jenna said. What a great way to show off their skills and new costumes, good luck girls!!!